So just to put you right it is Donkey Common or Donkey (‘s) Common.

This was originally a piece of common land near Parkers Piece.  Some of it got made into Petersfield; the green on the other side of Mill Road. Part of it was built on and what remains is where MRWF erect a marquee to welcome people to the fair. 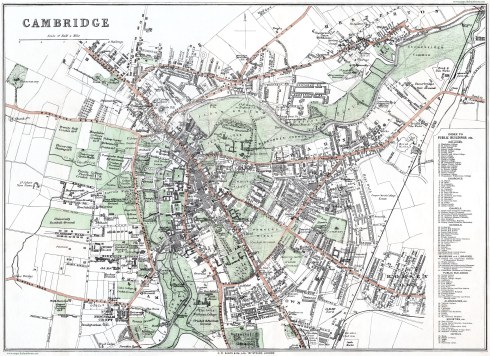 During World War II there were temporary A.T.S. huts on the common.

Eventually we were given our postings and I was sent to Cambridge where there was a Holding Unit on a common called Parker’s Piece, and our section was Donkey Common.

Our huts were wooden with wooden beds, and we slept on biscuits — a kind of mattress divided into three. There was a stove pipe in the middle of the hut and hut blocks were in an ‘H’ formation with washing facilities in the middle. As we lived on Donkey Common our C.O. decided that we ought to have a donkey so one was acquired. Two of us used to have to take the donkey to the blacksmith’s just off the main road near the station to be shod.

After the war when housing was in short supply there was a request to use these temporary shelters for much needed housing.

This extract comes from Hansard:

Asked the Secretary of State for War if he will subdivide the campsite at Donkey’s Common, Cambridge, and hand over those huts, which are surplus to military requirements, to the local authority for emergency housing purposes.

A skateboarding facility was built in 2006.

Cambridge is surrounded by beautiful open spaces. Each one has a rich history that reflects the social and economic conditions of several centuries.