Cambridge University is renowned worldwide for it’s architecture and learning, however the town has it’s own acclaimed treasures.

Standing slightly off the beaten track is a small family run business renowned for creating structures of a different kind, with skills that have been passed down through the decades

This shop caused Stephen Fry to tweet about its demise resulting, thankfully, in its restoration as one of Cambridge’s best loved cake emporiums .

A.E. Mason established Fitzbillies, a bakery and patisserie, in 1922.  Recognizable by its distinctive art nouveau frontage, the shop has had five owners to date, all of whom have baked with a passion for traditionally made fine foods.

The shop really took off when Clive and Julia Pledger took over in 1980.

Producing the traditional gooey delights of Chelsea buns steeped in syrup and deliciously chocolaty sachertorten, the shop had local people and undergraduates queuing up outside the shop on a daily basis.

Such an array of traditionally made cakes, breads, meringues, biscuits, and savouries provided the perfect extravagance, all carefully wrapped or boxed by one of the surliest woman I have ever met.  But still we all came back for more.

Under the Pledgers the shop grew and a sandwich shop was opened in Regent Street as well as a small stall in the newly opened food hall at Eaden Lilley in 1984. Too there was a thriving mail order business and outside catering for weddings and College functions.

It was recorded that in 1984 Fitzbillies were making 3,000 Chelsea buns a week.

In 1988 Fitzbillies was named best British food shop in ‘Courvoisier’s Book of the Best’.

In the same year  the mail order business extended to the Web – receiving two orders on the first day, one from Australia the other from America.

Sadly, after their marriage break up and despite Julia’s tremendous efforts the shop struggled and in 1991 there was a new owner of Fitzbillies – Penny Thompson. Penny had been working in the shop as a general assistant and one can imagine had become as passionate about the place as so many other owners and customers alike.

During her time at Fitzbillies Penny was able to rent the shop next door and turn it into a restaurant (that shop had previously been Heffers Penguin bookshop, closing in 1985 after 28 years of stocking only Penguin books,  after which it was a ladies boutique for a short while).

But the story appeared to end in 2011, when both closed.

Stephen Fry’s Twitter plea to save Fitzbillies was heard abroad. That and his wife, Alison’s fond schoolgirl memories of the delights of their sticky buns lead Tim Hayward, food writer and broadcaster to invest in 52 Trumpington Street – and so a new era began …

In his book on Cambridge Nikolaus Pevsner describes Magdalene Street as having ‘the best group of pre-classical domestic architecture in Cambridge’.

Most of the present buildings originate from the 16th Century, although they have all had subsequent additions and alterations.  The buildings were merchant’s houses or Inns.  Given Magdalene Street’s proximity to the buzzing Port of Cambridge this was once a thriving commercial centre-playing host to many European traders.

In the early nineteenth century it was reported that there were 31 Inns and beer establishments between Bridge Street, Quayside and Magdalene Street.

Magdalene Street boasted 5 inns. The Cross Keys Inn, Pickeral – dating back to 1540, The Swans, Plough Arms and The King’s Head. The Yards attached to these Inns were where the beer was brewed.

Whilst today only the Pickerel Inn survives there remains some tell tail signs of spirits from the past.

Today at 25 Magdalene Street we find a very respectable and classy ladies clothing shop.  Selling adorable and quirky designs from Paul Smith and Vivienne Westwood (to name a few).  But if you can manage to drag your eyes away from the tempting baubles in the shop window and cast your eyes upwards you will be in for a surprise.

Carved ‘grotesques’ or brackets support each of the overhanging floors. These carvings leave little to the imagination.  Local lore will tell you it was a brothel and was used by Samuel Pepys – a student from across the road.  Students and ladies of the night seemed to go hand in hand at one time in Cambridge.

However, it is more likely that the figures were a protection against witchcraft – a wandering witch would take fright – as well she might!

Although Cambridge is renowned world-wide for its University, there was a time when it was almost as famous for its trading links and annual Fair.  The centuries the River Cam provided a crucial physical link with other parts of East Anglia and the Continent of Europe.  Cambridge became an important distributions centre and seat of one of the largest Fairs in Europe.  The old Roman road that runs through the town also played a considerable role in shaping the Cam Bridge (now Magdalene Bridge).  The siting of the Cam Bridge was crucial to the development of the town, and the need to protect this river crossing resulted in the erection of a Roman fort overlooking the bridge. Thus for both geographic and strategic reasons Cambridge became a convenient stopping place for travellers and merchants.

As early as 43 AD the Romans built a fortified camp at Castle Hill, and in 300 AD they laid out a new Roman town.  They also built a system of canals that linked Cambridge with other Roman settlements in the Fen.  However, it was the Danes who really put Cambridge on the trading map when they arrived in 80 AD.  Interlinking waterways that connected with the River Cam offered river travel as far a King’s Lynn and the Wash.  When the Vikings arrived with their more sophisticated boats and established trading links with Asia and Europe, the town took off as an inland port and international trading centre.  The Danes built a settlement by the bridge and erected wharves there and then went on to urbanise Cambridge.  On the south side of the river, on the current site of St John’s College, they laid out symmetrically arranged streets and a new market place.  The Church of St Clements in Bridge Street, has Danish foundations. 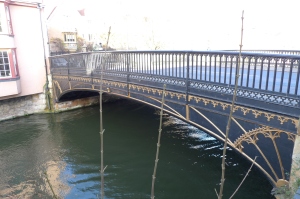